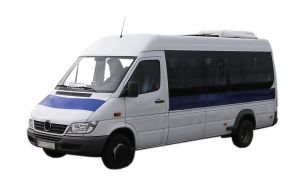 I am fortunate to commute to work by train. Once I arrive downtown, along with other employees from my office, I take a shuttle bus provided by our employer. It’s a 10-minute ride from the station to our building. The distance is short enough to walk, which I did all of last summer, but this year I can’t seem to catch the earlier train, which allows me the time to walk.

On the morning shuttle, most people still have on their headphones or are just too tired to talk . In the afternoon, when we take the shuttle back to the station, there is more discussion. A few afternoons ago it was just the driver, another employee and me on the ride to the station. The driver, an Ethiopian immigrant named Danny, was worried about baseball game traffic the next day, he told us.

“Bring your shoes and walk,” he suggested. “Last time, round trip takes me one hour forty-five minutes. Can you believe it? Danny’s Express tries our best, but it’s tough.”

Danny doesn’t own this shuttle company, but I appreciated his creativity after my long day at work.

The other woman and I commiserated with him about traffic in our city. Our discussion continued and Danny shared with us that on the day when the baseball game caused the traffic congestion, his dispatcher called him at eight o’clock that night. There was someone still waiting for him at our corporation, the dispatcher said. Apparently she’d been waiting since 6:20 pm.

Danny was incredulous. His last pick-up at our building had been just prior to 6:20 pm; this woman had waited nearly two hours when she could have walked the distance in 20 or 30 minutes. I wondered if there were even any trains left at that hour.

Danny had to return to pick her up. When he reached our building she was there, waiting, with cell phone in hand.

It’s hard to know what the back-story is in this situation. Maybe she was fearful to walk – although it is still very light here even after 9 pm. Maybe she wasn’t wearing appropriate shoes. Maybe she had an injury or disability that wasn’t visible to Danny. But she could have hailed a cab, or taken the city bus that goes right by our office. The shuttle was definitely not her only solution.

What struck me is the difference between the experience we have – a private shuttle to and from our corporation, with plenty of seats, a heater and no livestock on board except humans. I haven’t been to Ethiopia but I imagine that a bus ride there is much different than the experience I have on my morning and evening shuttle rides.

Danny was surprised by this woman’s insistence that she be transported to the train station, I imagine not only because it was an inconvenience at the end of his long day but also because in the scheme of things, there were many other solutions that she chose not to use. In places such as Ethiopia, walking (regardless of your shoes or fears or disabilities) is likely the only solution one might have. Here in America we so quickly forget, or never even realize, the good fortune that we have here.

On baseball game day, as Danny suggested, I brought my running shoes and enjoyed every minute of my walk to the station that afternoon. The only thing missing was the cheerful greeting, “Welcome to Danny’s Express!” when I set out on my journey.

This entry was posted in Corporate life. Bookmark the permalink.