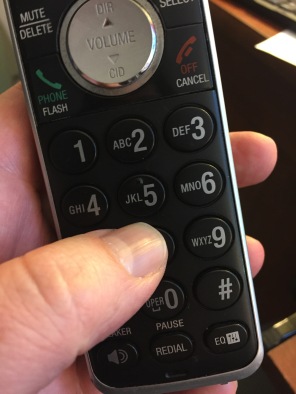 Who are you going to call?

to the election of Donald Trump, I was coasting. I realize that now.

I vaguely knew the names of my representatives. (The ones for whom I cast my vote.)

I had no idea what my congressional district was, never mind the state legislative district to which I belong.

I supported (from afar) people who took to the streets to voice their concerns over issues that I also support.

In just a few months, all of that has changed.

It’s only the second day of the second month of the year and so far I’ve become more active than I’ve been in the last decade–maybe two. Here’s what Mama Activism looks like for me. So far, I:

Is it scary? Yes. But, it’s also inspiring. These people are doing work for our country. If I want them to represent me, and my beliefs, it’s my duty to let them know how I feel.

During my phone calls today, one staffer shared that she was keeping a tally of the number of calls she received. I was the 131st person to call in support of this budget. My call could make a difference.When I told the other staffer that I supported the Governor’s proposed budget she said, “We do, too.” That connection matters.

When I told the other staffer that I supported the Governor’s proposed budget she said, “We do, too.” She proceeded to tell me background about the House and Senate budgets that I would have never known before. That connection matters.

I don’t share these “stats” to brag or boast; I share them as a reminder that as mamas and as citizens we can get active.

When we’re feeling hopeless and like there isn’t anything we can do, there are things we can do. They may seem small, but resistance is built by a collection of small steps.

It’s been a while

My first son’s birth brought me back to the written word nearly 12 years ago.

And, the inauguration of Donald Trump has brought me back to Motherlogue. It’s good to be here.

For today, I’ll share the words of a hymn (written by Joyce Poley) that we sang at the Edmonds Unitarian Universalist Congregation yesterday:

That’s what I’ll be doing here at Motherlogue: writing one more word, ’til there is peace for us and everyone.

In this blog, you will find some space. Some simplicity. You will find your voice and you will share it with others.

You will find experience and a way to express yourself again. To share your words…your heart. To create conversation. To be true.

Dear writer, you will remember what it is to put words on the page. You will bear witness to who you are and to what makes you tick.

You will come and go, dear writer, but this page will always be waiting.

I’m going to try following the prompts that Lisa Jo Baker posts on her blog every Friday. This week’s is: See. The rules? Write for 5 minutes. No editing. No over-thinking. No backtracking.

My sweet six-year-old son is learning to read. This week his class was assigned their first two words: I and see.

This afternoon as he and I ate lunch he said, “I memorized my book, Mama.”

And so began his retelling of the first book he can read on his own.

When he was done, he was beaming. We had a hug. A “proud of you” moment and then he cleared his dishes from the table.

That word, see, stuck with me all afternoon. Everything he’s learning to see. Everything he has yet to see. Gratitude that he can see to read. To learn.

So often I take for granted all that I can see. The sweet faces of these two boys as they are sleeping. Seeing them play, argue and make amends. Seeing them interact with my husband and my mom. Seeing them with their peers at school.

All this wonder at my fingertips, simply because I, too, can see.

And that’s a NaNo wrap

I made it to 50K on Saturday. Hunkered over my laptop as my husband and sons slept, I typed the final words of my 2013 NaNoWriMo creation. There were several times during the month when I wasn’t so sure I’d make it to my 50K goal. But I did and I learned a lot along the way.

Try New Things: I tried something new this year — writing a novel in stories. Originally I thought that would make things “easier” because I could just start a new story. That was not the case. I wanted the stories to link together (remember: novel in stories, not a collection of short stories). Remembering the details and starting the next story at the “right” place was difficult. The main character who linked all of the stories also wanted to take over the book, so keeping her in check was a challenge. Even though it was tough, I’m still glad I tried this new format. That’s some of what NaNo is about: permission to try new things.

A Commute and Lunch Hour Actually Help: In 2010 I was working full-time at a corporate job. I had a 30-minute commute to and from work on a train. As I searched for time to write this year, I realized that my one hour commute, as well as my lunch break, had really helped me meet my goal in 2010. This year I got creative about writing time, allowing myself 30-minute chunks of time to write when I wasn’t working on another freelance project.

Peer Pressure Works: I know another writer mom who also embarked on NaNo this year. Mid-way through the month we started sending our wordcount updates to each other via email. Seeing that she had hit 15K helped me get motivated to get there, too. And then 35K, then 42K, etc. The back and forth was like a relay race, where we were passing the “you can do it” baton back and forth. I think I may have given up the effort had it not been for the encouragement I found in sharing our wordcounts.

All in all, NaNo 2013 was a good time and I’m happy that I finished. Now I’m considering returning to my NaNo project from 2010. After three years, I think I might be ready.

As for this project, we’ll have to wait and see.

The last week of NaNo

Next week at this time, NaNoWriMo will be over. The last few days, it’s consumed me. My laptop has been out and I’ve grabbed every minute possible to add words to the page.

At some point last week my six-year-old son asked me, as we were walking up our front steps, “Mama, how many words have you written in your novel?”

I told him my total and mentioned that I still had a ways to go.

“I know!” he said, the excitement clear as he turned around to face me on the steps.

“You can type in the car when we drive to Thanksgiving,” he suggested.

The fact that this sweet boy of mine was helping me think of ways to make my goal? Well, that made me all the more fired up to get those 50,000 words on the page.

One word at a time.

Recent reminders that have come up thanks to the NaNo process:

A writer—someone once said—is a person for whom writing is difficult. That resistance you’re feeling is proof that you’re digging deep. To write a novel is to lose your way and find it over, and over, and over again.

That’s it for now. I’m busy losing and finding my way to 50K.

There was a hiatus…

In my NaNoWriMo writing. My younger son turned six years old on Monday and that means we were celebrating all week! SO, I’m now at a place where I will need to write 2.700 words per day to make my 50,000-word goal on November 30.

For whatever crazy reason, after the break of not writing for about a week, I feel like is a real possibility. I’ve always said it’s bad news if I get behind. But, this time I feel like it’s different.

Just need to get busy.

If you were wondering…

If you were wondering, I’m still at the NaNoWriMo challenge. On Saturday I reached 15,000 words in my “novel in stories”.

This is hard! (Hmmm…have I said that before?)

It’s also great. I’ve been reminded how fun it is to watch stories evolve and take surprising shape. Go in directions I hadn’t anticipated.

That reminds me of a time when I heard Kazuo Ishiguro speak. From his British perspective, he admitted that he thought it was just a little crazy when American writers talked like the story was in charge.

“Who is writing it anyway?” he wondered out loud.

Whether it’s me writing the story or my novel writing it, this thing is still being written… little by little.

Now I remember: This NaNoWriMo thing is hard

I’m at 7,333 words. And I’m wondering what on earth I was thinking when I took this challenge on again. It’s hard to write all these words.

Especially hard when the self critic wakes up strong and ready to fill my head:

But, I trudge on. This morning I told myself: This is the life of a writer — being in your head, battling that critic and getting words (somehow) on the page.

As I stared at the screen, cursor blinking, waiting for me to write SOMETHING at 6:33 am, I realized I was too close to one character. So, I changed her name, her situation, her family.

When I took a step back and switched those details, I was able to write 300 words. Whew.